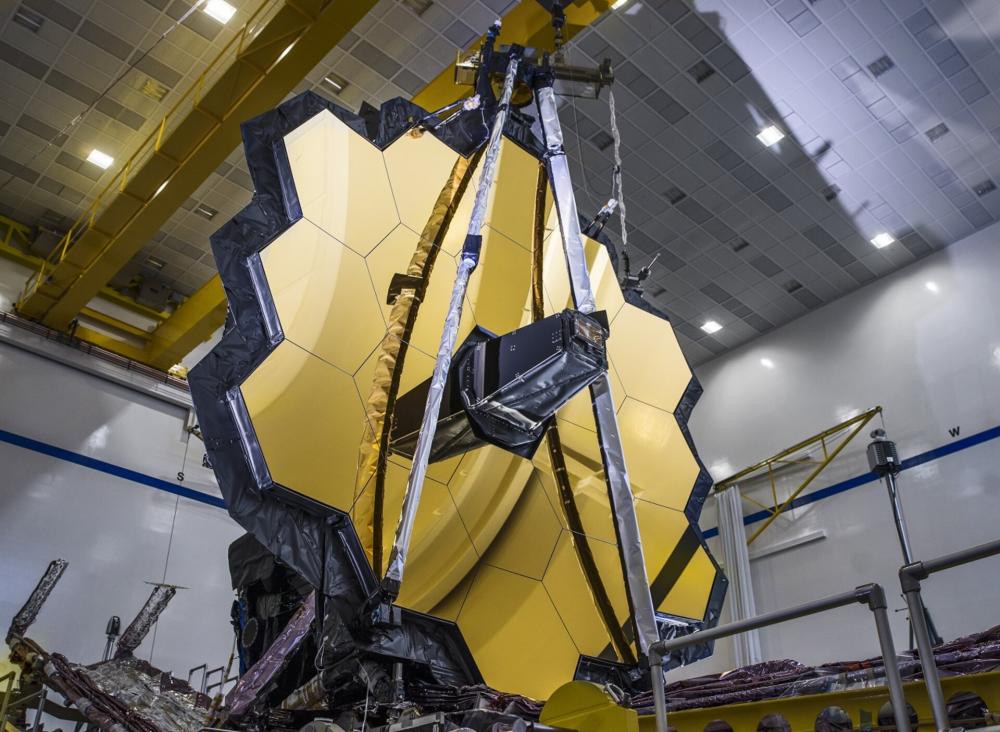 We’ve been watching since Christmas day with bated breath to see the complex unfolding of the pioneering James Webb Space Telescope. It has been humbling to see a device of such complexity achieving each of its planned stages of deployment with such apparent ease. We have been inspired by the planning, ingenuity and teamwork of the team behind the JWST and wish it well on the remainder of its journey to the second Sun-Earth Lagrange point (L2), its home for what now looks to be the next 20 years.

Where is Webb? Check Webb’s progress at the NASA website

Webb needs to function absolutely flawlessly from day one, that’s why it took such an incredibly long time to build and test–over twenty years. This perfection is required because the telescope will reside around a million miles from earth at a special point on the other side of the Earth to the Sun, meaning it can’t be serviced by astronauts. This Lagrange point is a position of balance where the forces exerted by the earth and sun reach an equilibrium, allowing the Webb to maintain its position without consuming too much of its vital fuel to maintain its course.

Because Webb operates in the infrared spectrum, it needs to be as far away from the Earth and Sun as it can be to avoid interference–the Earth is very active in the infrared, so positioning a few hundred miles above the earth like the Hubble telescope would render the JWST as useless, albeit very pretty, space junk! Because the L2 orbit is always in earths shade, it allows the Webb to cool to its chilly operating temperature of -188 degrees.

The JWST’s mission objectives are varied, but it was designed primarily to peer back as far as possible into the observable universe. Astronomers want to characterise the formation of the first galaxies to come into being. Because the light from this cosmic genesis is now so incredibly old, over 13 billion years, the light has shifted into the infrared spectrum, or ‘red-shifted’. Webb is so sensitive that it would be able to detect the infrared signature of a bumblebee on the moon from the earth!

Another advantage to infrared astronomy over visible is that infrared light has the ability to penetrate clouds of gas and dust which visible light is blocked by. This means we can see further into nebulae and galaxies and study more of the objects contained within them.

When will we get results?

Webb is slated to start work during the summer months of this year. It will spend the next five months in its calibration phase, where technicians and engineers will ensure each of Webb’s enormous gold plated beryllium mirror segments are focused perfectly at the secondary mirror and into the various instruments which will analyse the data from the primary mirror.

These instruments include NIRCAM which will detect the light in the near infrared. NIRSPEC, which will turn near infrared light in to a spectrograph so we can analyse the physical makeup of celestial objects. MIRI will detect the mid infrared with a camera and a spectrograph. MIRI will provide a wonderful widefield image akin to those we saw from the Hubble space telescope. The Fine Guidance Sensor (FGS) Allows Webb to point and track precisely.

The next crucial phase in the commissioning of Webb is happening around the 24th of January. This is when Webb arrives at L2 and it adjusts itself so it is orbiting properly. The stage was set for insertion right from the beginning of the journey on the Ariane 5 rocket. Webb was intentionally given a slight under-burn by the Ariane 5 so it could then gently nudge itself with its own fuel to the correct position. If Webb overshot, the whole mission would be over. This is because it would be impossible to turn the telescope around – the heat of the sun would destroy the telescope because it is designed to work at extremely low temperatures.

The life of the Webb mission was dictated by the accuracy of the Ariane 5’s launch. It has recently become clear that the launch was so incredibly accurate that Webb’s L2 insertion burn will require minimal fuel, and the mid course correction burns earlier in the mission only required very small adjustments to be made to the trajectory. This means there is a surfeit of fuel remaining for the maintenance of Webb’s position at L2, now estimated at a 20 years worth. This is 15 years longer than Nasa’s worst case scenario, and ten years better than expected. Congratulations Arianespace!

As Webb begins our journey into the deep past, engineers at NASA are already looking into James Webb’s successor. The Large Ultraviolet Optical Infrared Surveyor will, if it is built, make Webb look small! Slated for launch no later than 2036, LUVOIR is the next step in giant space telescopes. We can’t wait to see this and future missions develop and bring us even greater understanding of the universe we find ourselves in… Until then let’s all cross our fingers for Webb’s insertion and calibration phase and look forward to some astounding deep field images from this magnificent machine. You can track the progress of Webb at the Nasa website’s Where is Webb page.

While the JWST is up there using infrared radiation to learn about the secrets of the universe on a massive scale, there are scientists down on Earth using it on a smaller scale every day. Infrared spectroscopy is a common and powerful analytical tool used in many laboratories around the world.

Molecules are basically atoms of various elements held together in a range of configurations. The molecules, and the bonds between the atoms, are continually vibrating, stretching and rotating with varying amounts of molecular energy. And it just so happens that the frequency of the bond vibrations is of a similar order to that of infrared radiation.

In FT-IR spectroscopy, when infrared radiation is passed through a sample, some of the light (or “energy”) is absorbed as it resonates with the vibrations of the molecule. Through many years of theoretical and practical research, analytical scientists have learned that the vibrations of different types of molecular bonds absorb infrared radiation of specific wavelengths. By measuring the wavelengths that are absorbed, it is possible to determine which molecules are present within a sample.

So, whether you’re using infrared spectroscopy to search the stars for the secrets of the universe, or using it in the lab to uncover the secrets of unknown substances, there’s no debate that infrared light opens the door to many otherwise invisible mysteries.

We are the UK’s leading supplier of used scientific and laboratory equipment with over 30 years of experience serving a wide range of businesses.

We pride ourselves on our ability to tailor orders to meet your individual needs and offer great customer service at affordable prices.

Cookies
This website uses cookies to store and access device information. Consenting to these technologies will allow us to process data such as browsing behaviour which helps us to tailor our services and improve our business.
Manage options Manage services Manage vendors Read more about these purposes
View preferences
{title} {title} {title}

Cookies
To provide the best experiences, we use technologies like cookies to store and/or access device information. Consenting to these technologies will allow us to process data such as browsing behaviour or unique IDs on this site. Not consenting or withdrawing consent, may adversely affect certain features and functions.
Manage options Manage services Manage vendors Read more about these purposes
View preferences
{title} {title} {title}
View Cart Checkout Continue Shopping